Promote Your Most Important Offer Here 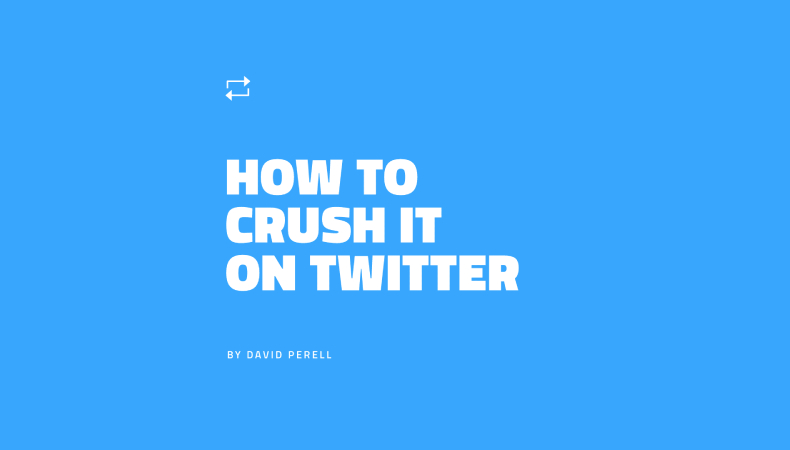 How To Crush It on Twitter – Learn how David grew his following to 120,000 followers

Twitter is the most important media company in the world.

Twitter is the world’s largest library where people from every industry share ideas. It’s a town square where journalists, academics, executives, entrepreneurs, and world leaders debate the future.

And it’s an always-on conference where you’ll meet like-minded people, many of whom will become life-long friends. It’s already the center of gravity for people who work in technology and finance. It will only become more influential as the world moves towards remote work.

Twitter is the only social network that rewards you for the quality of your thinking. It’s such a powerful platform that my account is now worth more than my college diploma.

In How To Crush It on Twitter, you’ll learn how to use Twitter to make friends, learn faster, and accelerate your career.

Don’t follow Twitter’s recommendations for using the platform. They’re geared towards a mass market that’s interested in gossip over learning, celebrities over intellectuals, and news over timeless ideas.

Don’t make the same mistakes I did when I started using Twitter. Enroll in “How to Crush it on Twitter” and save hundreds of hours instead. That way, you can benefit from Twitter immediately.

In How To Crush It on Twitter, you’ll learn how to:

Modern networking happens on Twitter. Put the platform to work for you. Stop being a passive consumer and start being an active producer instead. By the end of this course, you’ll be able to use Twitter to learn faster, create career opportunities, and spark real-world friendships.

Name of Course: How To Crush It on Twitter – David Perell | Release Date: 2021

Or pay with Crypto here